Our research in collaboration with SPring-8/JASRI and Advanced Photon Source (APS) of Argonne National Laboratory involves a number of studies. We have performed X-ray microtomographic (micro-CT) and nanotomographic (nano-CT) analyses of biological soft tissues, including human, mouse, and fruit fly brains. Cellular and subcellular structures, such as neurons, neurites, and dendritic spines have been visualized at micrometer to nanometer resolution using synchrotron radiation X-ray sources. More details are... 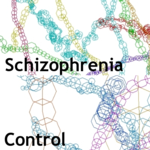 Psychiatric symptoms of schizophrenia suggest alteration of brain network. However, the physical basis of schizophrenia has not been delineated. We performed nanometer-scale 3D analysis of brain tissues of schizophrenia and control cases and found that neurites of schizophrenia cases are thin and tortuous compared to controls (figure). In this study, we visualized structures of cerebral tissues of the anterior cingulate cortex (Brodmann area BA24) and the superior temporal gyrus (BA22) by using synchrotron radiation nanotomography or nano-CT. Neuronal networks visualized in the 3D images were traced to build their Cartesian coordinate models. The obtained models were used for calculating structural parameters including curvature and torsion of neurites in order to analyze their geometry. Results of the geometric analyses indicated that the neurite curvature is significantly different between individuals and becomes extraordinary in schizophrenia. The mean neurite curvature in schizophrenia was up to 3.9 times higher than that of the control. The differences in the neurite curvature result in differences in the spatial trajectory and hence alter neuronal circuits. The curvature also inversely correlates with neurite thickness that affects the transmission of active potentials. We suggest that the structural differences of neurons between individuals represent their mental personality and hence reflect psychiatric symptoms of schizophrenia. This study is news released from Argonne National Lab and widely mentioned in the news media. It's also featured in the APS highlights. Original papers: Transl.Psychiatry 2019 2021 (ranked top 1 percentile with Altmetrics) YouTube: 3D image - Network. We recently found that brain capillary structures of schizophrenia cases and controls show a correlation with their neuron structures. DOI YouTube 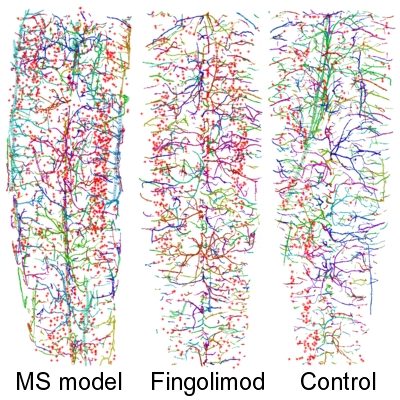 Multiple sclerosis is a neurological disorder in which the myelin sheaths of axons are damaged by the immune response. We recently reported a 3D analysis of brains and spinal cords of a mouse model of multiple sclerosis, known as experimental autoimmune encephalomyelitis (EAE). EAE-induced mice were raised with or without administration of fingolimod, which is used in the treatment of multiple sclerosis. Three-dimensional structures of the brain hemispheres and spinal cords of the EAE mice were visualized with synchrotron radiation microtomography. Microtomographic cross sections revealed dilation of capillary vessels and vacuolation in the spinal cord of the EAE mice. Vacuolation was also observed in the cerebellum, suggesting that the neuroinflammatory response progressed in the brain. The vessel networks and vacuolation lesions in the spinal cords were modelled by automatically tracing the three-dimensional image (left). The analysis results indicated that the distribution of vacuolations was not uniform but three-dimensionally localized. The mean vessel diameter showed a linear correlation with the clinical score, indicating that vasodilation is relevant to paralysis severity. We suggest that vasodilation and vacuolation are related with neurological symptoms of multiple sclerosis. DOI arXiv PubMed YouTube

We have also reported a three-dimensional analysis of the brain network of the fruit fly Drosophila melanogaster by synchrotron-radiation nanotomography. A skeletonized wire model of the left half of the brain network was built by tracing the 3D image of the brain network. The obtained models of neuronal processes were classified into groups on the basis of their structures. The model structure indicated that the Drosophila brain is composed of networks with different complexity and extensity depending on the brain regions. Simple networks in the optic lobe should be appropriate for relaying information straightforwardly while intricate and widespread networks mainly in the central brain can integrate information from a number of brain regions. These structures of the reconstructed networks provide a basis for understanding how the Drosophila brain works. An article reviewing this study appeared in MIT Technology Review. DOI PubMed arXiv YouTube


Recently, our interests have been focused on (1) three-dimensional structural analysis of biological soft tissues, including brain tissues of schizophrenia cases (DOI), and (2) evaluation of the spatial resolution of real sample images.


This collection invites original research focused on the mapping of neuronal connections, as well as the development of related tools and methods.
Submission deadline: 31 December 2022.


A GUI-based program for neuronal network model building. We use this software to convert 3D images of neurons into the 3D Cartesian coordinates of neurons to analyze the geometry of brain network.


Reconstruction and image processing of micro-CT and nano-CT data taken at SPring-8 and APS Argonne. On-the-fly CT reconstruction is implemented using CUDA and SIMD assembly code up to AVX2.

Test patterns for microtomography and nanotomography


Test patterns for the estimation of spatial resolution of 3D images.

Neural network layers inspired from our study on brain tissues of schizophrenia cases outperform conventional layers. Over 60% of weight parameters can be eliminated without any changes in training procedures or network configuration. Front Neurorobot 16, 851471, 2022. 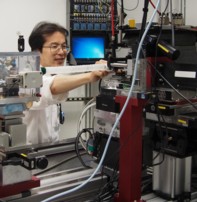 Mizutani attaching a sample on the rotation stage of the 32-ID beamline of APS, Argonne National Lab. If you use human tissue samples, your operating procedure must be approved by the institutional committee beforehand. The procedure may ask you to wear personal protective equipments.